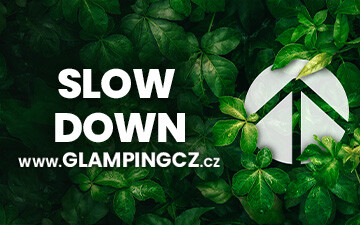 Launch of the SLOW DOWN campaign - GlampingCZ

The portal GlampingCZ, a part of the BPR - BOHEMIA PUBLIC RELATION s.r.o., launched its third season in the spring. It enters the next stage with a new modern logo, a redesigned website, and the SLOW DOWN marketing campaign.

How did it all start?

The first idea for the project was born in April 2019, when the first glamping tent was built in the Kinsky family's private game preserve. This was followed by cooperation with other pioneers of Czech glamour camping and the glampingcz.cz Portal was born. In addition to selected domestic and foreign accommodation, it brings interesting facts from the world of glamping, including the possibility of investing in glamping. The portal GlampingCZ is trying to show that glamour camping nowadays is not only about the classic glamping tent, but also about other unique places and types of accommodation.

To the opportunity the launch its third season, GlampingCZ has introduced a new timeless and easier-to-remember logo. The portal's web presence has become more user-friendly since May, thanks to a redesign and simplification of the structure. The design of the new logo and the development of the website were led by the graphic team of the parent company BPR. A result is a clear place where users can immerse themselves in the search for their dream accommodation, soak up the unique atmosphere of glamping, or get information on how to set up their glamping site.

"In the future, we would like to strengthen the position of our glamping portal on an international level. Our goal is to participate in the innovation of glamping and to be a carrier of innovation in this field," said Jiří Matuška, project manager of GlampingCZ. "We want to share the idea that it is important to be able to slow down and take a breath. That's why we are preparing a SLOW DOWN campaign for May this year, which you will see on billboards and social media," added Mr. Matuška.

Cookies are very small text files that are stored on your device when you visit websites. We use cookies for various purposes and to improve your online experience on the website (for example, to remember your login details).

These cookies are used to collect information for traffic analysis on our website. For example, these cookies can track things like which sites visitors are interested in and how much time they spend, which helps us understand how we can improve our site for you. This does not identify any persons.

These cookies are used to serve ads that are likely to interest you based on your browsing habits. These cookies, as requested by us and / or the advertising providers, may combine information collected from our website with other information, independently collected from other websites, regarding the activities of your internet browser within their advertising network of websites. If you choose to delete or disable these targeting or advertising cookies, your ads will still show, but may no longer be personalized and relevant to you.