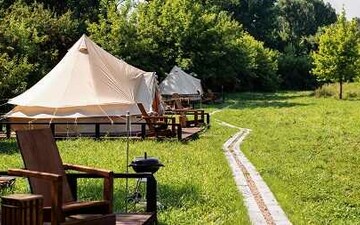 Combine luxury and comfort with the tranquillity of nature and have a glamping experience. Anyone who doesn't want to lose their comfort while enjoying the enchanting countryside instead of the bustling city will love its experience. In our blog, we will regularly bring you interesting facts from the world of glamping, and you will learn more about this chic way of holidaying in nature.

The term "Glamping" is a combination of two English words, "glamorous" and "camping". If you're glamping, you can expect to live in fancy tents, apartments, or even treehouses. This unconventional holiday offers adventure and an unforgettable experience, such as social detox, comfort, and undisturbed relaxation.

Although it's a relatively new trend, the word "glamping" only entered the Oxford dictionary in 2016, it all started much earlier.

Nowadays, an extremely famous and well-known type of glamping dates back to the time when hunters used to run around in Asia and build their dwellings out of wooden sticks. These primitive dwellings used by Siberian tribes can be considered the forerunners of today's yurts. They were later also popular with nomads. The reason for this was their ease of disassembly and the possibility of assembling them in another place. Another was their weather resistance.

The origin of this type of dwelling is attributed not only to North America and the Native Americans but also to the Eskimos and the inhabitants of Siberia. The structure of the tepee was suitable for easy dismantling and game viewing. The earlier buffalo or horse hide used to build the tepee has now been replaced by a high-quality, durable fabric.

John Steward, 3rd Earl of Atholl, decided to furnish the interiors of tents in the Scottish Highlands with luxury furniture and decorations from his palaces. This act could be considered the first hint of luxury camping in the United Kingdom.

In the early 20th century, as African safaris became the adventure of choice, wildlife hunting trips in Africa gained on popularity. Despite their desire to go hunting, travellers were not willing to sacrifice the comforts of home for the thrill of the hunt. This meant that safari tents were equipped by luxurious equipment that matched their domestic standards. Inside the tents, then, you could find amenities ranging from electric generators to folding bathtubs to cases of chilled champagne.

Today, "amazing camping" is more popular than ever. And on a global scale. Busy and restless times call for quiet relaxation, which you can find almost anywhere in the world in the form of treehouses, tepees, yurts, domes, houseboats, cabins, and more. You can look forward to an introduction to each type of glamping in our next article.

Some of the well-known glamping destinations in the world include the USA, Canada, New Zealand, Australia, and the UK. Awareness of this luxury camping has recently spread to South America. In terms of popularity in Europe, this unusual accommodation reaches almost every corner. It is favoured not only in countries with warm climates but also in the Nordic countries where you can enjoy the Northern Lights from the comfort of a glamping site.

Luxurious camping also in our country

This phenomenon has undoubtedly reached our regions too. For inspiration on where to go glamping in the Czech Republic, you can visit our portal and have a look at the glamping sites on offer.

Tiny house by the pond

At count Kinský's with a breath of safari